There is no love lost between me and this even toed ungulate.  I’ve never been partial to the swine.  One to many canned hams coated in a gelatinous goo that turned a stomach and made one green in the gills.  No, me and pork will never be Facebook friends.  I will however use it to experiment with.  My beloved Kyle however is a huge supporter of the Suidea family.  Serve it up as chops, ribs, bacon, sausage, slathered in gravy, shoved in a tin and called SPAM the boy loves it.

It had to have been a few months ago when I first started toying with the notion of experimenting with pork belly.  I recall it was around the time i was making roasted butternut squash gnudis (totally different blog post but sooo damn good!!!).  A local osteria here had been posting videos on line which featured items served in their restaurant and there was a pairing of butternut squash gnudi and smoked braised pork belly.  Color me intrigued.  I promptly went out and purchased 2 pork bellies at the local Asian market (I live for that place) and then put them in the freezer and promptly forgot about them.  A few days ago whilst digging through freezer bags filled with roasted tomato puree, marinara sauce, roasted butternut squash puree and persimmons i came across both bags of pork belly and immediately wanted to play with them.  But what to do.  It was pouring rain outside.  The idea of setting up my chiminea for smoking sounded as inviting as a sudden outbreak of shingles and I haven’t yet purchased my stove top smoke box.  So what was a kid to do to inundate this slaughter slab of sow with flavor.  And then it dawned on me.  Why not dry age it.  You always hear of dry aged beef but not a whole lot about pork.  After doing some research (link provided at the end of this blog) and reading up on the process I quickly found a dry rub that I felt would provide me with that smokey taste as well as a (hopefully) a good bark.

I quickly went to my pantry and pulled out a plethora of herbs.  Whole coriander seeds, fennel seeds, cumin seeds, star anise, whole black peppercorn, smoked paprika, things that I thought would imbue and permeate the pork belly with flavor without taking from the richness of the fatty piece of meat.  A quick toast in a dry skillet and a few whirls of my magic bullet and I had an aromatic rub that cleared my sinuses for days.

I “carefully” scored the skin of the pig in a criss cross pattern, being mindful to not cut to deeply into the meat and then applied a generous amount of scotch bonnet sea salt. 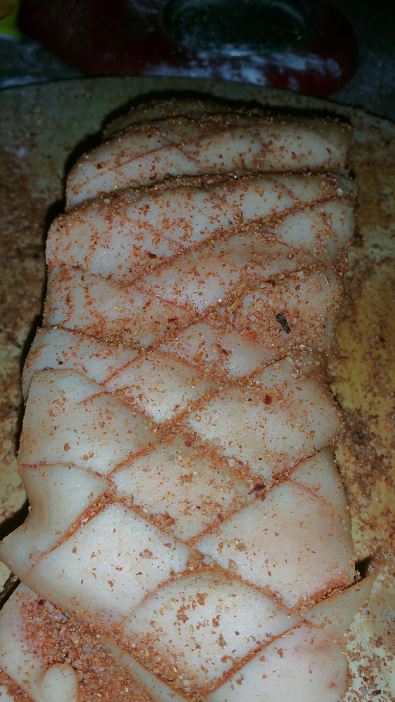 Then….chaos.  I went nuts with the rub.  I was bound and determined to push the entire cup and a half of rub into and onto this pig in order to get the results i wanted.  I may have gone overboard.  Just a little…a tiny bit…just the taddest bit overboard…>.>…..<.< 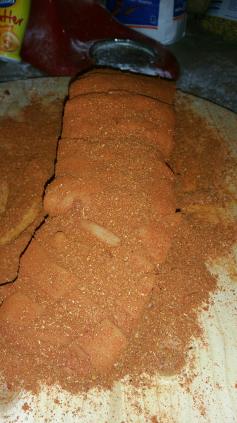 Then into a zip lock bag for 3 days to sit in the fridge until Sunday.  Why Sunday?  I had read several recipes that said to allow it to sit in the rub for 3 days. Why?  In all honesty I havent the slightest clue but I’m sure as I continue to experiment with this and ask questions I’ll discover the reason.

Three days went by and bam Sunday.  The day of reckoning. 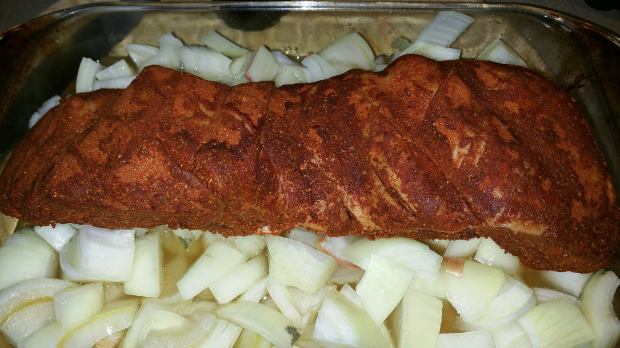 Did it work?  Did it fail? Are we bound for the ER?  No clue.  So we whip the oven up to a whopping 450 degrees and lay the perfumed porker on a bed of roughly chopped onions which were liquored up with a bottle of my favorite shandy from Leinenkugel, the grapefruit shandy. I picked this particular ale in hopes that the acidic qualities would help to balance out the richness of the fat.  Tossed that bad boy in for 45 minutes,  reduced the heat to 250 degrees and continued to roast for another 3 hours, pouring a second beer in at the 2 hour mark.  And this was the end results. 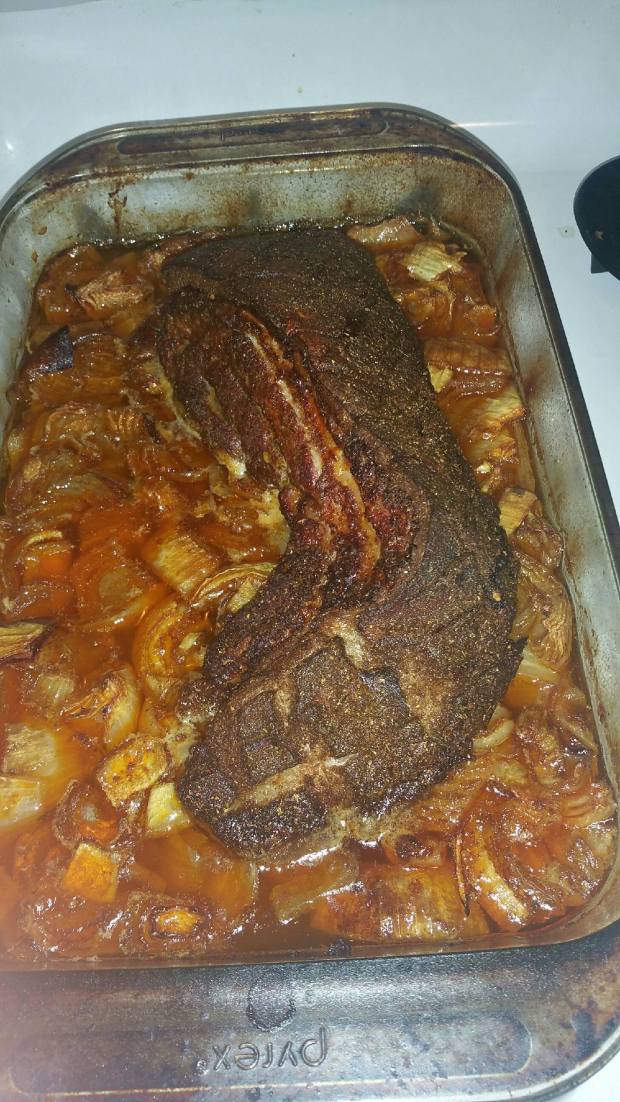 The onions were beautifully cooked in the comfit of pork fat and beer.  The pork displayed a bark that made me bounce with giddiness at the hopes of a success…Now would it be as tasty as it looked or was this a complete and utter kitchen nightmare. After a 10 minute rest (which felt like an eternity).  I sliced the slab of goodness in half.  Kyle stood patiently next to me eager to try the bounty of 3 days of waiting.  We were not disappointed.  Well not entirely.  The rub offered a nice bit of heat which did not overwhelm the palatte.  It crept up slowly along the back of the mouth and lingered just long enough for you to enjoy the sweet and salty flesh.  The thin layer of fat which had not rendered off literally melted like butter on the tongue.  The only disappointment was the skin.  While the bark gave the illusion of a crispy skin it was anything but that.  In error I had not read the recipe completely.  I was only to have coated the actual meat and not the skin, leaving it exposed to the elements.  The dry rub essentially sealed in all the moisture and turned it into a sort of rubbery exterior.  Definitely not good eats but easily remedied.  I simply cut it off. 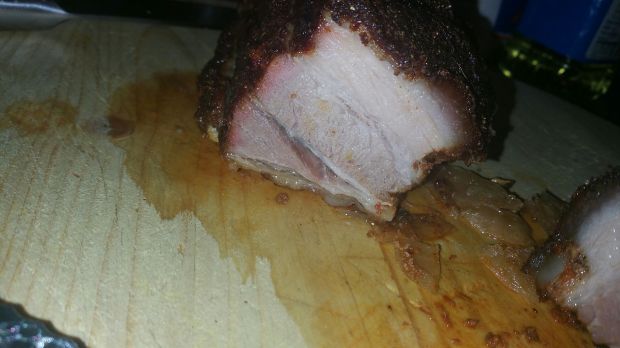 The plans for this piece of pork heaven is not yet decided.  Will I slice it thin and serve it up with a bit of celery root puree or will i have it along side some ricotta ravioli with grapefruit buerre blanche.  I dont know yet.  All i know is this adventure was both educational as well as delicious and while I might not be a fan of the three little pigs quite yet, this little bad boy is definitely on my list of things to do again.

Kimchi is my gateway drug

enter the world of a foodie one dish at a time